Launch of the European Space Agency’s (ESA) Solar Orbiter, in which Czech scientists and businesses are heavily involved, is planned to take place on 8th February 2020. In the Czech Republic, projects and contracts worth CZK 180 million were successfully implemented, financed from the contribution of the Ministry of Education, Youth and Sports (MEYS) to ESA. The spacecraft will be launched from the Kennedy Space Centre in the USA on an Atlas V rocket. Participation in the Solar Orbiter mission is the most significant Czech participation in the space project since 1980s. 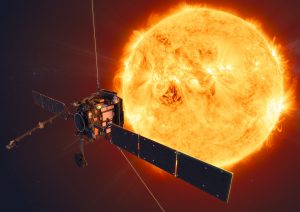 “By its importance and costs, the Czech participation in the Solar Orbiter mission is one of the top Czech successes in space, such as the first Czechoslovak (European) astronaut Vladimir Remek or Magion satellite.“; commented on the importance of the event Mr Pavel Doleček, Deputy Minister for Higher Education, Science and Research at the MEYS. Participation in Solar Orbiter represents one of the most costly participation in the space project ever in the history of the Czech Republic and Czechoslovakia respectively. It is also important due to the number of scientific instrumentation with participation of Czech research organisations and how many different Czech research organisations and companies were involved in the preparation of the mission.

Participation in the development of scientific instruments

Significant was especially the participation in the wide international consortia developing scientific instruments for the mission – Astronomical Institute of the Czech Academy of Sciences, Institute of Atmospheric Physics of the Czech Academy of Sciences and Faculty of Mathematics and Physics of Charles University took part with 5 projects in the preparation of 4 scientific instruments (out of the total of 10 instruments) for Solar Orbiter. 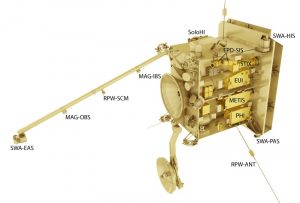 In addition to the research organisations mentioned above, a number of Czech companies participated in the development and production of components for scientific instruments – e.g. mirrors, key optical elements of the Metis coronagraph, were provided by the TOPTEC Laboratory; power supplies and electronics of STIX and RPW devices were built by BD Sensors-CSRC Space Division and by G.L. Electronic; esc Aerospace company supplied flight control software to the STIX instrument; Czech Aerospace Research Centre participated in the thermo-vacuum testing. Small mechanical parts for the SWA device were supplied by VAKUUM PRAHA. In addition to these scientific instruments, Czech companies also participated in the development of the spacecraft, e.g. mechanical components for the construction of the spacecraft were supplied by Maxmechanik and STARTECH; Atos Convergence Creators supplied equipment for testing of the spacecraft.

Solar Orbiter was selected in 2011 as the first medium-class mission of the ESA’s Science Programme. Solar Orbiter will focus on research of Sun, and especially the inner heliosphere, the so far uncharted, innermost region of the Solar System. The goal is to better understand and try to anticipate the irregular behaviour of a star upon which our lives depend.

ESA is an international organisation dedicated to cooperation in space research and development and applications of space technology. The MEYS’s contribution to ESA’s R&D programmes will exceed 12.7 million EUR in 2020, while the Czech total contribution to ESA will reach nearly 60 million EUR. 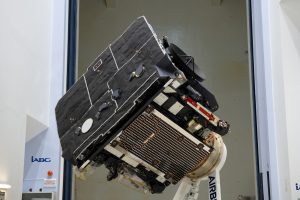 ESA’s Solar Orbiter at IABG in Ottobrunn, Germany, before it starts its journey to Cape Canaveral in Florida; credits: http://www.esa.int