On Wednesday 18 December 2019, the CHEOPS mission has been launched by Soyuz launcher from the European spaceport of Kourou, French Guyana. CHEOPS is the first mission of the European Space Agency (ESA) science satellite fleet dedicated to the study of extrasolar planets, or exoplanets. The mission will observe bright stars that are already known to host planets, measuring minuscule brightness changes due to the planet’s transit across the star disc.

CHEOPS will target stars hosting planets in the Earth- to Neptune-size range, yielding precise measurements of the planet sizes. This, together with independent information about the planet masses, will allow scientists to determine their density, enabling a first-step characterisation of these extrasolar worlds. A planet density provides vital clues about its composition and structure, indicating for example if it is predominantly rocky or gassy, or perhaps harbours significant oceans.

CHEOPS is the first of ESA’s missions dedicated to the study of exoplanets. While CHEOPS will follow up on exoplanets discovered by other missions, it will also identify the best candidates for detailed study by future missions as James Webb Space Telescope which will be used also to search for water and methane, or prepared missions of ESA for exoplanet research – PLATO, which will investigate the properties of rocky planets in orbits up to the „habitable zone“, and ARIEL, which will focus on analysis of exoplanets atmospheres.

Data obtained by CHEOPS are important also for Czech scientist from the Astronomical Institute of the Czech Academy of Sciences and J. Heyrovský Institute of Physical Chemistry of the Czech Academy of Sciences, who are already directly participating on next two ESA’s missions for exoplanet research PLATO and ARIEL – the data will help them not only to better prepare these mission but also help them in their own research on known exoplanetary systems.

The CHEOPS mission is a partnership between Switzerland and ESA with important contributions from 10 ESA member states implemented as the first small-class “S” mission of ESA’s Science Programme. The participation of Czech Republic in ESA’s research and development programmes is funded by the Ministry of Education, Youth and Sports in the amount of about 13 million EUR per year. ESA’s Science Programme currently offers many other opportunities for Czech research institutes and businesses. 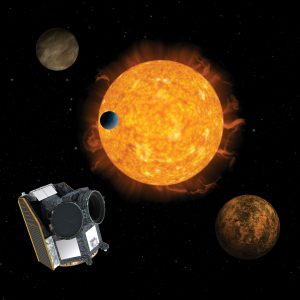 Animation of the CHEOPS mission