ARIEL (Atmospheric Remote-sensing Infrared Exoplanet Large-survey) is the fourth medium class mission “M4” of European Space Agency’s Science Programme. ARIEL will study what exoplanets are made of, how they formed and how they evolve, by surveying a diverse sample of more than 1000 extrasolar planets. ARIEL will measure the chemical fingerprints of the atmospheres as the exoplanet crosses in front of its host star, as well as detecting signs of ingredients such as water vapour, carbon dioxide and methane. ARIEL will be launched in 2028.

The Czech team under the leadership of scientists from the J. Heyrovský Institute of Physical Chemistry of the Czech Academy of Sciences will be responsible for the preparation, testing and manufacturing of the main optical elements for the satellite – a system of common optics mirrors guiding the beam from the elliptical primary mirror to the spectral optical system of the satellite. The task will consist of the mirror construction, mount construction and cryogenic testing. Optical components will be developed by the TOPTEC (Research Centre for Special Optics and Optoelectronic Systems), which is a part of the Institute of Plasma Physics of the Czech Academy of Sciences.

Thanks to this contribution to the mission’s scientific instrumentation, the Czech team will take part in the highest management of the ARIEL consortium and will be able to participate in the mission preparation and will then have exclusive access to the obtained data. The Czech team will also be actively involved in the Working group on Spectral Database and Prebiotic Evolution. The scientific goal of Czech participation is the detection of the main spectral features of target molecules and markers of important chemical processes detected in spectra of exoplanets by the ARIEL satellite.

Exoplanets are currently in focus of the ESA Scientific Programme. On 17th December 2019, the CHEOPS mission will be launched – ESA’s upcoming exoplanet watcher, to perform a first characterization of known exoplanets. The work of CHEOPS will be expanded by PLATO with a planned launch in 2026. PLATO will be followed in 2028 by ARIEL. Participation on PLATO is the first Czech direct involvement in an exoplanet mission.

Czech participation on ARIEL will be supported by 1.85 million EUR from the contribution of the Ministry of Education, Youth and Sports to the ESA PRODEX programme. The costs of ARIEL, which do not include costs of the scientific payload and which are funded by the ESA Science Programme, are estimated at approx. 470 million EUR.

The ESA‘s Science Programme currently offers many other opportunities for Czech scientific institutes and businesses. 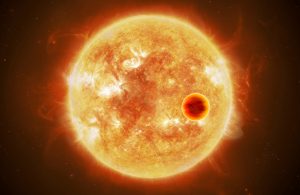