Dubna (Russian Federation), 18th October 2018 – Ambassador of the Czech Republic to the Russian Federation Vítězslav Pivoňka, along with representatives of the Committee on Science, Education, Culture, Youth and Sport of the Chamber of Deputies of the Czech Republic, visited the Joint Institute of Nuclear Research (JINR), located in the City of Dubna, approx. 120 km north of Moscow. Chairman Václav Klaus, Vice-Chairs Karel Rais and Jiří Mihola and a Member of the Committee Ivo Pojezný participated in the visit. 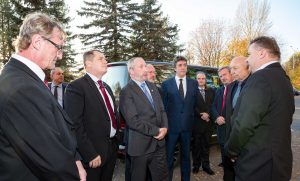 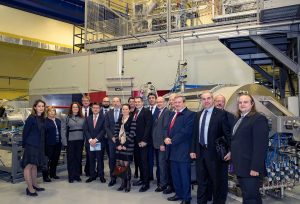 The Czech delegation was accompanied by Deputy Head of Czech National Group in the JINR Vratislav Chudoba and supported by Marek Vyšinka (delegate of the Ministry of Education, Youth and Sports), Stanislav Kulhánek (delegate of the Ministry of Finance) and Ivan Štekl (Director of the Institute of Experimental and Applied Physics, Czech Technical University in Prague). The Czech delegation was welcomed by Director of JINR V. A. Matveev. Afterwards, the participants had the opportunity to get acquainted with the basic research domains in the JINR and collaboration between JINR and Czech research organizations. Several excursions have been realized – e.g. to the Laboratory of High Energy Physics with the exhibition of superconducting magnets manufactured for the projects NICA and FAIR, and to the Laboratory of Nuclear Reactions with the DC-280 cyclotron that will become a part of the Super-Heavy Elements Factory. A meeting with Czech scientists working in the JINR and a visit to the hotel at the Moscow Street 2, which is reconstructed by the Czech company ASARKO, were organized too.

The study and production of super-heavy elements is one of the main research topics, where JINR had reached important results – new elements such as Dubnium, Moscovium, Flerovium and the last one Oganesson were firstly synthesized there. It is also one of the reasons why this year´s Czech Physics Olympics in category A was devoted to the synthesis of new elements (e.g. the paper “Hranice Mendělejevovy tabulky”), which pleased the delegation. Participants considered the visit successful and representatives of the Chamber of Deputies expressed their support to the Czech participation in JINR.

JINR is an international organization active in the field of nuclear and sub-nuclear physics, material sciences and radiobiology. It was established in 1956 and the Czech Republic, earlier Czechoslovakia, belonged among its founding members. Nowadays, the JINR has 18 Member States and 6 Associated Countries. Membership of the Czech Republic is administered by the Ministry of Education, Youth and Sports, which also covers the membership fee. The Committee for Coordination of Cooperation with JINR serves as an advisory body to the Ministry.