For this Saturday, 20th October 2018 at 03:45 AM, BepiColombo the joint space mission of the European Space Agency (ESA) and the Japanese Space Agency (JAXA) is scheduled for a launch from the European spaceport of Kourou. The goal of this mission is the exploration of planet Mercury, especially of its physical properties, origins of its magnetic field or research of its magnetosphere. Mercury is the least explored planet in the inner Solar System. 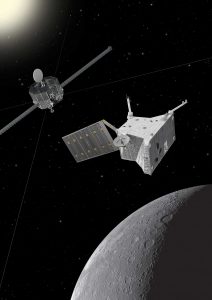 The voyage of BepiColombo to Mercury will last more than 7 years. The probe will have to tackle the immense gravitational forces of the Sun by using powerful solar-electric propulsion system and 9 gravitational manoeuvres around the Earth, Venus and Mercury. The probe will enter the orbit of Mercury at the end of 2025.

The preparation of the BepiColombo mission started already before the accession of the Czech Republic to ESA in 2008. Nevertheless, Czech scientists and engineers contributed to the preparation and planning of the mission by modelling of the interactions between the solar wind and Mercury’s magnetosphere, by testing and calibration of Gama-ray sensitive instrumentation and by participation on design and construction of the laser altimeter BELA.