At 01:45:28 GMT on 20th October 2018, the mission BepiColombo blasted off on Ariane 5 from the Europe’s Spaceport in Kourou, French Guiana. After the successful launch the spacecraft separated from the upper stage of Ariane 5. Later, the solar arrays, which gives the spacecraft a total width of 30 metres and medium- and high-gain antennas were deployed. 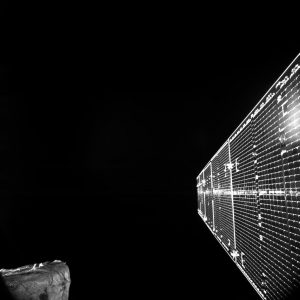 BepiColombo will now travel more than 7 years to Mercury. The spacecraft will have to tackle the immense gravitational forces of the Sun by using powerful solar-electric propulsion system and 9 gravitational manoeuvres around the Earth, Venus and Mercury. The probe will enter the orbit of Mercury at the end of 2025.

BepiColombo is a joint space mission of the European Space Agency (ESA) and the Japanese Space Agency (JAXA). Its goal is the exploration of planet Mercury, especially of its physical properties, origins of its magnetic field or research of its magnetosphere. Mercury is the least explored planet in the inner Solar System.

Preparation of the BepiColombo mission started already before the accession of the Czech Republic to the ESA in 2008. Nevertheless the Czech scientists and engineers contributed to the preparation and planning of the mission by modelling of the interactions between the solar wind and Mercury’s magnetosphere, by testing and calibration of Gama-ray sensitive instrumentation and by participation on design and construction of the laser altimeter BELA.

See the video from the BepiColombo mission launch.