On 10th June 2021, the “EnVision” mission has been selected by the ESA´s (European Space Agency) Science Programme Committee as the next “medium-class mission” in the Cosmic Vision Programme. The mission aims to explore the nearest neighbouring planet of the Earth – Venus and contribute to our understanding why Earth’s closest neighbour is so different.

Focus of the mission

EnVision will perform high-resolution radar mapping and atmospheric studies. The mission should help scientists understand the relationships between its geological activity and the atmosphere, and it should investigate why Venus and Earth took such different evolutionary paths. The mission will be implemented by ESA in collaboration with NASA, which several days ago announced the selection of its own Venus missions – DAVINCI+ and VERITAS. The earliest launch opportunity for EnVision is 2031.

EnVision will be equipped with scientific instrumentation allowing combined observations at wavelengths from UV to radio frequency at an unprecedented scale of resolution, from the core to the upper atmosphere of Venus – the surface radar VenSAR, subsurface sounding radar SRS, three spectrometers VenSpec to study chemical composition of atmosphere and surface and with a radio science experiment. Czech research organisations and companies can participate directly in the scientific team of the mission and in the development of scientific instruments through the PRODEX programme. Czech companies can also apply for contracts for the development of the spacecraft.

ESA´s Science Programme currently offers many other opportunities for Czech scientists and industry. 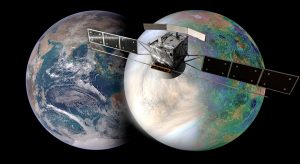 Animation of the EnVision mission