LISA (Laser Interferometer Space Antenna) is the third large “flagship” mission of the European Space Agency’s (ESA) Science Programme, currently under preparation. The LISA mission will be the first dedicated space-based gravitational wave observatory. LISA is to be launched in 2034.

The mission will consist of three spacecraft transmitting a laser beam at a distance of up to 2.5 million kilometres. Each of the three spacecraft will carry two redundant laser beam sources. As the gravitational wave passes, the phases of the laser beams change, which makes it possible to capture ancient and very distant collisions of supermassive black holes. This will help to reveal how the first galaxies and large black holes formed at their centres. However, research on gravitational waves opens considerable potential also for new scientific discoveries, for example in the field of quantum fluctuations in the early universe.

Participation in the preparation of the scientific instrumentation of the mission will complement the Czech scientific participation in the consortium, where Czech scientists are already involved in working groups creating simulations for the LISA mission. Czech scientists in the LISA consortium contribute to the development of so-called waveforms for the movement of compact objects around supermassive black holes, which create gravitational waves due to their circulation. Czech scientists have also long time been involved in the physics of black holes, both in the field of theoretical modelling and in the field of observing black holes using electromagnetic radiation from their close vicinity. Synergies between LISA and another ESA’s large mission ATHENA (X-ray observatory), in which Czech scientists are also involved, are expected for a comprehensive investigation of black holes.

Mr Pavel Doleček, Deputy Minister for Higher Education, Science and Research at the Ministry of Education, Youth and Sports notes: „Czech scientists, with the support of the Ministry of Education, Youth and Sports, managed to participate in all three ESA flagship missions – JUICE (mission to Jupiter), ATHENA (X-ray observatory) and now LISA. This shows that Czech science is an equal player in European space research. In addition, we recently identified in the analysis of the Roadmap of Large Research Infrastructures of the Czech Republic the topic of gravitational wave research as a potential area in which the Czech Republic could design a new project in the future.”

The Czech participation in the LISA mission will be supported in the first phase in the amount of almost 400 000 EUR from the contribution of the Ministry of Education, Youth and Sports to the ESA PRODEX programme. The total cost of the Czech participation is expected to reach 5.3 million EUR. The cost of the LISA spacecraft, which does not include scientific instrumentation and is funded by the ESA’s Science Programme, is estimated at 1.1 billion EUR.

The ESA Scientific Program currently offers a number of other opportunities for Czech research organisations and companies. 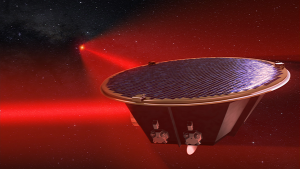