On behalf of a four-member Czech team from the Nuclear Physics Institute (NPI) of the CAS and from the Czech Technical University in Prague (CTU), our colleague Petr Chudoba, Ph.D. (NPI) handed over the manipulator for PSD detector, in-kind contribution of the Czech project FAIR-CZ for the FAIR infrastructure.

The successful site acceptance test of the manipulator for the PSD (Projectile Spectator Detector) took place in mid-September 2020 in the FAIR (The Facility for Antiproton and Ion Research) infrastructure under construction near Darmstadt, Germany. For the future CBM (Compressed Baryonic Matter) experiment within the FAIR infrastructure, this is the first in-kind contribution delivered to Germany and received from a foreign partner. The CBM will start its physical program after 2023.

Czech scientists are significantly contributing to research, development and construction of PSD for the setup of CBM experiment, which will gain from extreme luminosity and hence the possibility to study rare particles produced during heavy ion collisions. PSD will detect spectators from interaction of relativistic heavy ions with target and hence will be able to determine centrality as well as reaction plane per event.

PSD will be located at the distance of about 8-12 meters from the interaction point around beam pipe. The beam pipe have to be movable. Therefore, also PSD has to be movable in all three perpendicular directions as well as able to rotate in the range of several degrees. The weigth of PSD is about 22 tons, hence to design and build corresponding support frame, manipulator of PSD, which allows horizontal and vertical movement with the precision of milimeters as well as rotation of the whole PSD was not an easy task. Czech team succesfully undertook it. 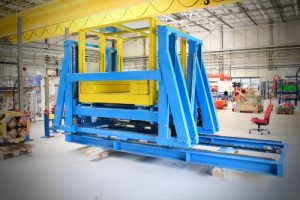