ATHENA (Advanced Telescope for High-ENergy Astrophysics) is the next large, flagship mission of the ESA Scientific Programme („L2“ mission), currently in the study phase. The large X-ray observatory ATHENA will address key questions in astrophysics, including: how and why does ordinary matter assemble into the galaxies and galactic clusters that we see today? How do black holes grow and influence their surroundings? The ATHENA launch is planned for 2028. 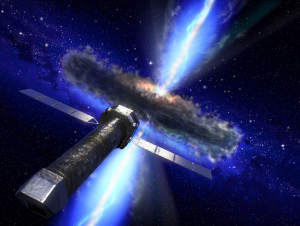 The Czech team is made up of researchers from the Astronomical Institute of the Czech Academy of Sciences and the Institute of Atmospheric Physics of the Czech Academy of Sciences. Scientific interest is mainly in the study of supermassive black holes, where the Czech team is already involved in spectral simulations and preparation of the models of radiation originating in the proximity of black holes. For the Czech scientists, also X-ray observations of the magnetized planets of the solar system, in particular Jupiter, which will be simultaneously studied by the JUICE probe (JUpiter ICy moons Explorer), the first large mission “L1” where the Czech scientists are involved as well, are also very important.

The Czech contribution to the scientific payload of ATHENA will consist of development and production of the Warm Front-End Electronics Real Time Unit (WFEE-RTU). The main function of WFEE-RTU is the monitoring of critical operational parameters of multiple parts of the X-IFU instrument. These include the integrated circuits (ASICs) in the WFEE unit responsible for acquisition and processing of the scientific data from the X-IFU detectors, temperature measurements from the cryogenic cooling system (DEWAR) and status of multiple relays and switches in the system. The WFEE-RTU unit is also responsible for commanding of the ASICs and configuring them for scientific operation.

The Czech participation in the ATHENA’s scientific payload will be supported by more than 3.1 MEUR from the contribution of the Ministry of Education, Youth and Sports to the ESA PRODEX Programme. The costs of ATHENA mission, which do not include costs of nationally provided scientific payload and which are funded from the ESA Scientific Programme, are estimated at more than 1 100 MEUR.

The ESA Scientific Programme currently offers many other opportunities for Czech scientific institutes and businesses.