At 05:03 CET on 10th February 2020, Solar Orbiter, a mission of the European Space Agency (ESA) with important participation of Czech scientist, blasted off on Atlas V rocket from the Kennedy Space Centre in Florida, USA. After the successful launch the spacecraft separated from the upper stage of Atlas V and Solar Orbiter started its journey to the Sun. 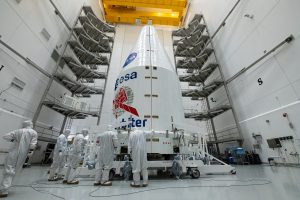 The spacecraft will be close to the Sun in two years

During its initial cruise phase, which will last until November 2021, Solar Orbiter will perform two gravity-assist manoeuvres around Venus and one around Earth to alter the spacecraft’s trajectory, guiding it towards the innermost regions of the Solar System. At the same time, Solar Orbiter will acquire in situ data by the instruments as RPW and SWA and characterise and calibrate its remote-sensing instruments as STIX or METIS. The first close solar pass will take place in 2022 at around a third of Earth’s distance from the Sun.

Solar Orbiter have to withstand temperatures more than 500°C

Once launched it will follow an elliptical path around the Sun, at its closest bringing it within the orbit of Mercury, just 42 million kilometres from the Sun, i.e. little bit more than a quarter of distance between the Earth and the Sun. As such, Sun-facing parts of the spacecraft will have to withstand high radiation and temperatures of more than 500°C while other parts will remain in shadow at -180°C.

The most important Czech participation in space project since 1980s

“By its importance and costs, the Czech participation in the Solar Orbiter mission is one of the top Czech successes in space, such as the first Czechoslovak (European) astronaut Vladimir Remek or Magion satellite“, commented recently on the importance of the event Mr Pavel Doleček, Deputy Minister for Higher Education, Science and Research, Ministry of Education, Youth and Sports (MEYS).

Projects and contracts worth CZK 180 million were successfully implemented in the Czech Republic, financed from the contribution of the MEYS to ESA. Significant was especially the participation in the wide international consortia developing scientific instruments for the mission – Astronomical Institute of the Czech Academy of Sciences, Institute of Atmospheric Physics of the Czech Academy of Sciences and Faculty of Mathematics and Physics of Charles University took part with 5 projects in the preparation of 4 scientific instruments (out of the total of 10 instruments). 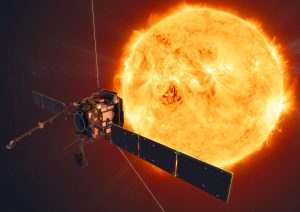 Czech teams were involved in the development of the STIX X-ray imaging spectrometer to study physical processes in solar flares and other phenomena in the heliosphere, the Metis coronograph for study of corona and eruptive processes in the solar wind, by two projects Czech teams participated in the preparation of the RPW instrument for measuring radio and plasma waves accompanying solar flares and they also cooperated in the development of the SWA instrument, which will measure the density, velocity and temperature of solar wind ions and electrons in high time resolution. Thanks to the direct participation in the development of scientific instruments, Czech scientists will have priority access to the obtained data.

A number of Czech companies were involved in the development and production of not only scientific instruments, but also components of the spacecraft itself, e.g. mirrors, key optical elements of the Metis coronagraph, were provided by the TOPTEC Laboratory; power supplies and electronics of STIX and RPW devices were built by BD Sensors-CSRC Space Division and by G.L. Electronic; esc Aerospace company supplied flight software for STIX instrument.

Solar Orbiter was selected in 2011 as the first medium-class mission of the ESA’s Science Programme. Solar Orbiter will focus on research of Sun, and especially the inner heliosphere, the so far uncharted, innermost region of the Solar System. The goal is to better understand and try to anticipate the irregular behaviour of a star upon which our lives depend.

ESA is an international organisation dedicated to cooperation in space research and development and applications of space technology. The MEYS’s contribution to ESA’s R&D programmes will exceed 12.7 million EUR in 2020, while the Czech total contribution to ESA will reach nearly 60 million EUR. The ESA‘s Science Programme currently offers many other opportunities for Czech scientific institutes and companies.