In early July 2019, the French nuclear safety authority has given SPIRAL-2 permission to operate. The commissioning of the Linear accelerator (LINAC), the main part of the NFS facility, was finally be able to start. The efforts of scientists, including the staff of the Nuclear Physics Institute of the CAS within the SPIRAL2-CZ project, have now produced the first important results: the scientists sent out the first proton beam, detected the first neutrons and acquired the first decay spectrum.

At the night on November 27, the LINAC reached its nominal voltage and accelerated the proton beam to the design value of 33 MeV, successfully tested (among others) the single burst selector. On December 5, the first low intensity proton beam at 33 MeV was sent to the so-called NFS Faraday Cup, the beam was pulsed at a frequency of 500 kHz by using the fast beam selector.

First neutrons were detected with a detector composed of a liquid scintillator placed in the time-of-flight room with a natural copper target. The irradiation station and the pneumatic transfer system, developed with participation of NPI scientists, were used for this first test. Attached a figure showing the neutron – gamma discrimination spectrum.

At the night on December 11, scientists obtained the first decay spectrum (Counts versus E-gamma). Then, LINAC team put of the LINAC off on December 13 so as to take the time for the slow shut down. LINAC will start again in May 2020 after three months of “Control equipment periodic” and one month of cooling of the LINAC to obtain the necessary stability of the helium pressure. 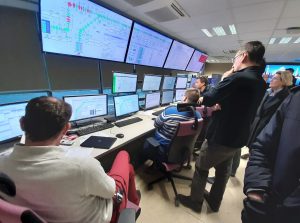