ITER (International Thermonuclear Experimental Reactor) is an international experimental facility for thermonuclear fusion research (tokamak type). Its aim is to investigate the conditions for nuclear fusion of hydrogen isotopes with the final goal of energy production. It is built near Cadarache in southern France, in cooperation of the European Union, United States of America, India, Japan, South Korea, Russia and China, which founded the ITER organisation for this purpose. Each of cooperating countries is involved in the project through its national agency, which is, in the case of the European Union (and consequently for the Czech Republic too), the Joint Undertaking „Fusion for Energy“ (F4E). F4E is a part of the EURATOM and was founded in 2007 for the period of 35 years. The total costs of the ITER project are currently expected to be approx. 20 billion EUR by 2025, when the fusion reactor is to be launched (first plasma). Tritium based experiments are planned from 2035 onwards.

The toroidal chamber of the tokamak ITER will have outer diameter 19.4 m (main plasma diameter 6.2 m) and height 11.4 m with the plasma volume 840 m3. The superconductive coils will reach the magnetic fields up to 13 T (central solenoid; toroidal coils 11.8 T a poloidal 6 T). The inner walls of the tokamak have to withstand enormous heat fluxes from 2 to 4.7 MW/m2 (for divertor 10 MW/m2 continuously and up to 20 MW/m2 in bursts). The tokamak shielding will be actively water cooled, temperature difference will reach up to 150 million °C at distance of several meters (4 K superconductive magnets to 150 million °C plasma temperature). Additional systems such as the cryogenics for magnet cooling, plasma heating systems, tritium production system and others will be part of the ITER complex. Such systems will be developed and tested on ITER project for future use in the first fusion power plant DEMO. One of the main ITER task is the verification of fuel self-sufficiency ensuring technology for the fusion reactor that is tritium production by fusion born neutrons in the Breeding Blanket.

Openings in ITER are advertised via the “Working at ITER” webpage. Students interested in internships in ITER (under some circumstances even high school students) may be informed here.

On the ITER Procurement webpage conditions for ITER procurement are described in detail, along with actually processed tenders. With regard to the degree of ITER construction phase the majority of tenders are already finished. Potential interested suppliers must apply through the Joint Undertaking Fusion for Energy, which also announces its own procurement. 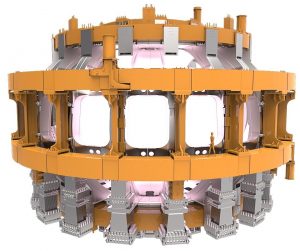 The Czech Republic is a Member of F4E as a Member of EURATOM. Member fee of the Czech Republic is around 50 000 EUR annually. From the scientific point of view the Czech membership in F4E is realized by the Institute of Plasma Physics of the Czech Academy of Sciences, especially by the Tokamak Department. Fusion research has long-standing tradition in the Czech Republic. It started in 1977 when the Institute of Plasma Physics of the Czech Academy of Sciences obtained the first tokamak CASTOR (which nowadays serves as the tokamak Golem to students of the Czech Technical University in Prague) and from 2008 on it operates the tokamak COMPASS – smaller version of the tokamak ITER. Prague has unique opportunity as one of few places, where 2 tokamak facilities are operated. Nowadays, under the COMPASS Upgrade project, financed by the Operational Programme Research, Development and Education (OP VVV), construction of a new tokamak with high magnetic field and other parameters relevant for the ITER and DEMO development is under way. In the field of fusion technology, the Research Centre Řež is an important partner, which will participate in testing of the first wall panels for ITER and participates in the development of Test Blanket Modules (TBM).