On 31st May 2022, Italy, as the envisioned host country of the future CTAO ERIC (Cherenkov Telescope Array Observatory – European Research Infrastructure Consortium) statutory seat, submitted to the European Commission the so-called step 2 application on the establishment of the CTAO ERIC consortium. The three-year process of preparation and finalisation of the relevant documentation since the submission of the so-called step 1 application in March 2019 has thereby been completed. The emerging CTAO ERIC consortium has already been presented at the ERIC Committee meeting on 27th June 2022. The internal adopting procedures in the European Commission will start in the coming days and will result in a decision on the establishment of the CTAO ERIC consortium within the horizon of 6 calendar months. The goal of the CTAO ERIC consortium will be the construction and operation of an observatory consisting of more than 100 Cherenkov telescopes designed to observe space in the field of gamma radiation of the highest energies. The observatory itself will consist of two parts – the northern site on La Palma island (Canary Islands, Spain) with a total of 21 telescopes and the southern site in the Paranal region (Chile) with a total of 99 telescopes. It will also include a data centre located in Germany and headquarters located in Bologna, Italy. In addition to Italy, the Founding Members are the Czech Republic, France, Germany, Poland, Austria, Slovenia, Spain and ESO (European Southern Observatory). Switzerland will become the Founding Observer. Japan will be the strategic partner and other cooperating countries will include Australia or Brazil. The cooperation will also take place with individual research organisations from the United States. The CTAO ERIC consortium will thereby have a truly global outreach. 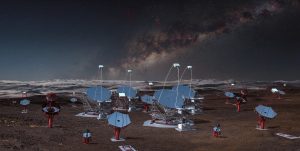 Currently, activities aimed at building the CTAO observatory are carried out under the CTAO gGmbH, within which the telescopes themselves were developed in three sizes – large (LST), medium (MST) and small (SST), specialized in different parts of the high-energy spectrum. The first prototypes of these telescopes were created and tested, their optimal location in selected localities was modelled, and the construction of infrastructure and engineering networks began. The construction of the observatory, as well as the construction of telescopes will only be possible under the CTAO ERIC consortium. The submission of the so-called step 2 application thus represents a major milestone in the development of the project. The CTAO project was included in the Roadmap of the European Strategy Forum on Research Infrastructures in 2008 and has become a Landmark since 2018. The Czech involvement in the project is through the CTA-CZ large research infrastructure project that is included in the Roadmap of Large Research Infrastructures of the Czech Republic. 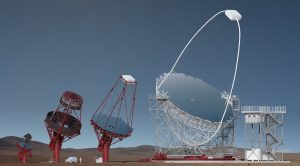 The CTA-CZ large research infrastructure has been on the Roadmap of Large Research Infrastructures of the Czech Republic since 2016. The Czech main contribution to the observatory is participation in the preparation and testing of optical surfaces for the MST and SST telescopes (the Czech Republic participates in the consortium, which developed the SST-1M telescope; unfortunately, it didn’t become the selected type of SST for the southern site of the observatory despite its undeniable advantages). The Czech Republic will also supply the FRAM telescopes for monitoring aerosols in the air. These telescopes have already been used to select sites for the observatory’s location, monitoring clouds in selected region. A pair of the SST-1M telescopes was recently installed on the premises of the Ondřejov Observatory, where they are tested in real conditions, including astronomical observations. At the same time, visitors of the observatory can see them, as they are in an open space outside the building, as is typical for this type of telescopes. Although these are small telescopes (small-size telescope), with a mirror diameter of 4 meters they are the largest telescopes in the Czech Republic. 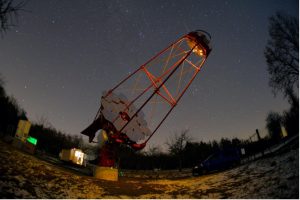 Involvement of the Czech Republic in the CTAO ERIC consortium

The Czech Republic will be engaged in the CTAO ERIC consortium through the Ministry of Education, Youth and Sports (MEYS) and the CTA-CZ large research infrastructure project of the Institute of Physics of the Czech Academy of Sciences. MEYS is financing the CTA-CZ large research infrastructure project with a special grant amounting to CZK 19.2 million in 2022.