The 16th session of the ICOS ERIC General Assembly, which is the leading governing body of the ICOS (Integrated Carbon Observation System) European research infrastructure, took place in Prague from 17th to 18th May 2022. The meeting was held in the Apollon Hall in the Villa Lanna, the conference and hotel facility of the Czech Academy of Sciences.

On 18th May 2022, the ICOS ERIC General Assembly unanimously elected Christian Plass-Dülmer, the German delegate from the Federal Ministry for Digitalisation and Transport, as the new Chair. He thus replaced Jean-Marie Flaud, who had held the position since 2015. The management of ICOS ERIC presented 13 new greenhouse gas measurement stations, which had passed the rigorous quality assurance process for standardised ICOS data production and were unanimously approved for the ICOS ERIC certification by the General Assembly. Two of new stations are the Experimental ecological workplace Bílý Kříž and the Ecosystem station Lanžhot. Research on local ecosystems with the aim of modelling future behaviour under conditions of a changing climate is underway at these stations. In the case of the Bílý Kříž station, it is a spruce forest, in the case of the Lanžhot station it is a floodplain forest.

All the stations and sites operated by the CzeCOS large research infrastructure, hosted by the Global Change Research Institute of the Czech Academy of Sciences, are a part of the European infrastructure of the ICOS project. They have already passed the rigorous quality assurance process for standardised ICOS data production and have been unanimously approved for the ICOS ERIC certification by the ICOS ERIC General Assembly. In addition to the Bílý Kříž and the Lanžhot stations, there are the Ecosystem station Třeboň and the Atmospheric station Křešín near Pacov meeting the criteria. 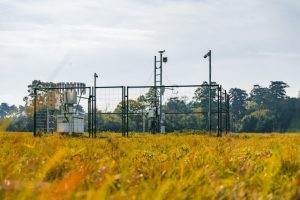 Werner Kutsch, Director General of ICOS ERIC, announced that the PAUL (Pilot Application in Urban Landscapes) project was launched in November 2021. This Horizon 2020-funded project aims to develop a greenhouse gas measurement system for urban areas, and combine and evaluate different measurement approaches to determine fossil fuel related emissions from the rest of the carbon dioxide in the atmosphere. Three cities of different sizes, Paris, Munich and Zurich, has been selected to test different measurement approaches in different areas. To increase the impact and to make sure the concept developed will fit for different types of cities in different countries and landscapes, also 12 other cities are joining the city network, including Brno.

Logo of the ICOS Cities project