Nature Physics magazine, the most important periodical publication in physics with 5-year impact factor 21.8, has published an article Probing dense baryon-rich matter with virtual photons, in its July issue. The article is a collective work of scientists from the HADES Collaboration, part of the FAIR project. Among the co-authors, there are also several NPI workers, working on the FAIR-CZ project: A. Kugler, P. Tlustý, O. Svoboda, V. Wagner, L. Chlad, P. Rodriguez-Ramos and Yu. G. Sobolev.

Quantum chromodynamics (QCD) matter, by which the universe was filled about 10 μs after the Big Bang, can be created in the laboratory as a transient state by colliding heavy ions at relativistic energies. Different phases in which QCD matter may exist depend for example on temperature, pressure or baryochemical potential, and can be probed by studying the emission of electromagnetic radiation. Electron–positron pairs emerge from the decay of virtual photons, which immediately decouple from the strong interaction, and thus provide information about the properties of QCD matter at various stages.

In the publication there is reported about the observation of virtual photon emission from baryon-rich QCD matter. The spectral distribution of the electron–positron pairs is nearly exponential, providing evidence for a source of temperature in excess of 70 MeV with constituents whose properties have been modified, thus reflecting peculiarities of strong-interaction QCD matter. Its bulk properties are similar to the dense matter formed in the final state of a neutron star merger, as apparent from recent multimessenger observation. 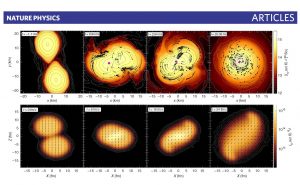