Czech university students now have a much bigger chance to be selected to the Student programmes of the European Organisation for Nuclear Research (CERN). This has been made possible by a new Agreement between the Ministry of Education, Youth and Sports of the Czech Republic (MEYS) and CERN, signed on 28th August 2019 in Geneva by Deputy Minister for Higher Education, Science and Research Mr Pavel Doleček. The MEYS expects that the Agreement will lead to an increase in the number of Czech students at CERN, which would further lead also to an increase in the number of Czech employees at CERN, which is still at a low level.

Within the framework of the Programme, students of Czech universities in technical fields of Doctoral, Master and Bachelor studies can apply for studentship in areas such as applied physics, IT, mechanical and civil engineering, electronics, robotics, mathematics, etc. The Programme is opened also for “administrative” students in the fields of law, finance, economics, logistics, translation, HR, etc.

Deputy Minister Pavel Doleček also briefly met with CERN Director General Fabiola Gianotti and other senior CERN representatives to discuss future developments of CERN and Czech participation in CERN. CERN is currently undergoing major upgrades to both the Large Hadron Collider (LHC) and the LHC’s experiments. Deputy Minister Pavel Doleček visited the ATLAS experiment, which is participated by Czech scientists and engineers in a significant way, as well as other CERN technical facilities, like an assembly hall for superconducting magnets, which are used at the LHC.

The current deadline for applying for CERN Student Programmes is 21st October 2019. The detailed information is available on the CERN website (links below) or, please, contact Mr Ondřej Novák from the Department of Research and Development of MEYS at ondrej.novak@msmt.cz.

Doctoral Student Programme allows the students to work on their Ph.D. thesis in CERN. The students can apply for a studentship in fields such as applied physics, IT, mechanical and civil engineering, electronics, robotics, mathematics, etc. The length of the stay at CERN is between 6 and 36 months.

Technical Student Programme is aimed at Bachelor and Master Degree students. The students can apply for a studentship in fields such as applied physics, IT, mechanical and civil engineering, electronics, robotics, mathematics, etc. The duration of the internship is from 4 to 12 months. About 120 students are selected for the programme every year.

Administrative Student Programme is aimed at undergraduate students specializing in administration (fields as law, finance, HR, translation, logistics, etc.) to spend a training period of 2 to 12 months during the course of their studies (Bachelor or Master).

An allowance of about 3300 Swiss Francs per month (net of tax) is provided by CERN to selected students.

CERN is an international R&D organisation based in Geneva, Switzerland, which operates the largest laboratory in particle physics worldwide. The main research infrastructure of CERN is the Large Hadron Collider (LHC) and experiments ATLAS, CMS, ALICE, LHCb and a number of other non-LHC experiments. The Czech Republic is a Member State of CERN since 1991. 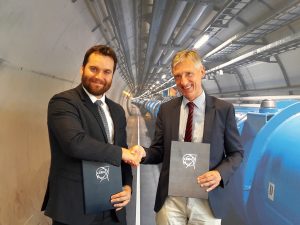 Deputy Minister Pavel Doleček signed on behalf of the MEYS a student fellowship agreement with CERN.