Berlin, 25th September 2018 – The inauguration ceremony of EU-OPENSCREEN ERIC took place at the Max Delbrück Center for Molecular Medicine in the Helmholtz Association in Berlin. 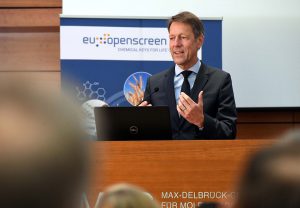 The inauguration ceremony was attended by Jean-Eric Paquet, Director-General for Research and Innovation of the European Commission, Georg Schütte, State Secretary of the German Federal Ministry of Education and Research, and Wolfgang Fecke, Director General of EU-OPENSCREEN ERIC. State Secretary Georg Schütte mentioned in his inaugural address, inter alia, expected socio-economic benefits of EU-OPENSCREEN and emphasized cooperation within distributed research infrastructure, as demonstrated by the example of the EU-OPENSCREEN European Chemical and Biological Database located at the Institute of Molecular Genetics of the Czech Academy of Sciences.

The objective of EU-OPENSCREEN ERIC is to create and operate a distributed research infrastructure, which will support high-quality research on molecular mechanisms of biological processes, inter alia through the creation, development and management of a European chemical-biological library of compounds, a central database of results and providing high-quality services for users via open access mechanism. The Czech Republic participates in the EU-OPENSCREEN through the large research infrastructure CZ-OPENSCREEN (National Infrastructure of Chemical Biology), which is operated by the Institute of Molecular Genetics of the Czech Academy of Sciences. CZ-OPENSCREEN is focused on the identification of new molecular probes and tools for research and validation of compounds suitable for development of new drugs. Within its portfolio of activities CZ-OPENSCREEN also systematically builds a collection of compounds including both divers, commercially available compounds, and chemical compounds originally synthesized in the Czech Republic.