The Institute of Plasma Physics of Czech Academy of Sciences  succeeded in the demanding call “Excellent Research” in the Operational Programme Research, Development and Education with the COMPASS-U project and will receive almost 800 million CZK in the next years for the development and construction of a new tokamak. The project has now been supported by leading US research institutes dealing with energy and thermonuclear fusion research.

On July 4, a CZ-US meeting was held in IPP. It focused on a development of cooperation between IPP and the leading US research institutes and universities in the area of  the fusion ​​research. The meeting was organized with the support of the United States Department of Energy (DOE) and the Czech Attaché for the Science and Technology in the USA Luďek Moravec. The meeting was attended by 22 leading scientists and executives from the top laboratories dealing with the thermonuclear research in the US, such as the Massachusetts Institute of Technology (MIT), the Princeton Plasma Physics Laboratory (PPPL), General Atomics (GA) and representatives of IPP. The aim of the meeting was to discuss new areas of cooperation concerning the development and construction of the new COMPASS-U tokamak and its future scientific use.

The COMPASS-U tokamak will be an experimental device for studying the thermonuclear fusion as a new energy source. The project is funded by the call „Excellent Research“ within the Operational Programme Research, Development and Education, which is under the jurisdiction of the  Ministry of Education, Youth and Sportsof the Czech Republic. With a budget of 797 million CZK, COMPASS-U will have unique global parameters. This is, in particular, due to the very high magnetic field (5 T) being used to keep a hot plasma in which an electric current of up to 2 million Amperes will be generated.

The meeting was opened by Director of IPP, Radomír Pánek, who welcomed guests from the USA, representatives of the US Department of Energy and Deputy Minister of Foreign Affairs Martin Tlapa. In his opening speech, Martin Tlapa expressed his support for the development of co-operation in the field of thermonuclear fusion research and said that it was necessary to: “Increase the cooperation between leading scientific institutions in the Czech Republic and the USA as an important prerequisite for the further economic development of our society”. Subsequently, after a brief presentation of the scientific activities of IPP, Radomír Pánek acquainted the members of the delegation with the Project COMPASS-U tokamak construction. In particular, he emphasized that: “This facility will be a part of technological and physical research in the leading US institutions such as MIT, PPPL, General Atomics and others”. During a fruitfull discussion, the representatives of these institutions expressed eminent interest in the cooperation, both on the construction of the facility itself and also on its future scientific use. In particular, the discussion mainly concerned the following issues:  research of liquid metal technology for fusion reactors, development of high-frequency plasma heating systems and physics of new operational scenarios etc.

In connection with this meeting, the next meeting will be held in Washington DC in October 2018.  The representatives of  IPP at the United States Department of Energy (DOE) will meet. The current issues for a cooperation in the field of fusion research will be formulated.  DOE might provide a financial support for this issues. The meeting will include also lectures and discussion at PPPL and MIT. 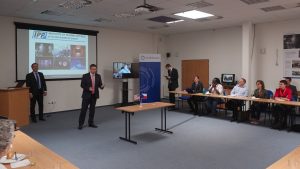 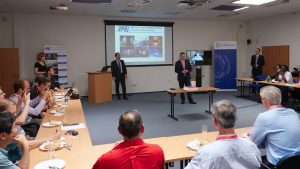