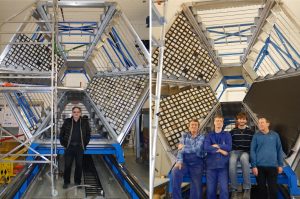 Support construction for the ECAL detector has been delivered and installed as a part of the HADES spectrometer in FAIR project (FAIR-CZ – Czech participation), Darmstadt, Germany, at the end of August 2017.

Czech scientists from NPI of the CAS, Řež, started to install first ECAL modules into the frame during September 2017. Two sectors was finished rather soon, see left photo, last third sector was almost finished before the end of year 2017, see right photo, thanks to good organization and previous preparations.

Several visits are planned during first half of 2018 in order to have ECAL fully operational with four sectors to take data during first HADES experiment at FAIR Phase 0 in second half of 2018.