The management of one of the largest Large Research Infrastructures (LRI) currently being built in Europe, the FAIR accelerator laboratory, spent two hectic days in the Czech Republic on November 24 and 25, 2022.

On the first day, there was a meeting with several dozen students and employees of the FNSPE CTU in Prague in its hall, where they were welcomed by the vice-dean of the FNSPE Ass. Prof. Jan Čepila, Dr. Andrej Kugler, head of the FAIR-CZ project, and Dr. Petr Chaloupka, head of the FAIR-CZ group at FNSPE. Prof. P. Giubellino and Mr. J. Blaurock presented the project as a whole, Dr. Pradeep Gosh spoke about internship opportunities for students and researchers from the Czech Republic at FAIR thanks to the GET_INvolved program.

On the second day, a meeting of the international committee (SAC) of the FAIR-CZ II project, which is the currently ongoing Czech contribution to the construction of the FAIR infrastructure, was held in Villa Lanna in Prague’s Dejvice quater. SAC members Prof. James Rittman and Prof. Joachim Stroth were also present here. J. Blaurock and P. Gosh used their free time to discuss the possibilities of supplying high-tech equipment from the Czech Republic to FAIR. Both visited the Řež research area, first the workshops of the Řež Research Center (CVŘ), where they met one of the managers of the CVŘ Ing. Petr Březina. They also inspected two workplaces in the accelerator area of the NPI: the Tandetron Laboratory and the Accelerator Mass Spectrometry Laboratory with the MILEA facility. They ended their trip with a visit to the Vakuum Praha company. 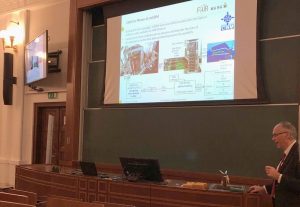 Prof. Paolo Giubellino during his lecture at the FNSPE CTU in Prague

This was followed by the signing of contracts on the exchange of students and researchers between the FAIR infrastructure and three Czech institutions: the Nuclear Physics Institute of the CAS, represented by the director Ing. Dr. Ondřej Svoboda and by the head of the FAIR-CZ project Dr. Andrej Kugler, Czech Technical University in Prague, represented by the rector Ass. Prof. Dr. Vojtěch Petráček, and the Faculty of Science of the Palacký University in Olomouc, represented by Ass. Prof. Dr. Vít Procházka. FAIR directors P. Giubellino and J. Blaurock signed the contract for the FAIR infrastructure. The ceremony was also attended by the vice-president of the Czech Academy of Sciences (CAS) Dr. Ing. Ilona Müllerová. According to the scientific director of FAIR, prof. P. Giubellino, there is one of the main tasks of the FAIR infrastructure to provide training and development opportunities for young scientists and engineers.

The subsequent discussion concerned, among other things, the potential time and financial impact of the interruption of cooperation with Russia on the construction of FAIR. According to Mr. J. Blaurock, this has indeed caused certain problems for the project, but only in a certain delay in the construction, not fundamentally.

Participants of the signing ceremony in Villa Lanna, from the left side: J. Blaurock, P. Giubellino, V. Petráček, I. Müllerová, O. Svoboda, V. Procházka, A. Kugler

FAIR (Facility for Antiproton and Ion Research) is an international laboratory for antiproton and ion research, built in cooperation with partners from many countries. It is one of the world’s largest projects for the construction of centers for international top research. FAIR is being built in connection with the German National Center GSI Helmholtzzentrum für Schwerionenforschung in Darmstadt. The Czech Republic is an associate member of FAIR.

The coordination of cooperation with the large research infrastructure of FAIR is provided by the NPI of the CAS. The Czech Technical University in Prague, Charles University, the University of Silesia in Opava and, more recently, the Palacký University in Olomouc, also take part in the cooperation.

The core of FAIR’s large research infrastructure is a world-unique particle accelerator with a circumference of 1,100 m. Nine countries are directly involved in the project, three thousand scientists from 53 countries are planning their experiments here in the coming years. Including the Czech Republic, which also supplies part of the technological equipment (as part of FAIR-CZ and FAIR-CZ II projects). Experimental collaborations will take place in four main areas, called NUSTAR (Nuclear Structure, Astrophysics and Reactions), CBM (Compressed Baryonic Matter), PANDA (Antiproton Annihilation in Darmstadt) and APPA (Atomic, Plasma Physics and Applications). Data from the experiments will be collected and analyzed in one of the most energy-efficient computer centers in the world, the core of which is the Green IT Cube supercomputer, which will also use specially adapted water cooling for computer components.