An annual conference of the Common Language Resources and Technology Infrastructure (CLARIN) took place on 10th–12th October 2022 in Prague, Czech Republic. LINDAT/CLARIAH-CZ large research infrastructure hosted the conference as a satellite event to the International Conference on Research Infrastructures (ICRI 2022), which will be held on 19th–21st October 2022 in Brno, Czech Republic. The annual gathering of wider humanities and social sciences communities was organized as a hybrid event in the 10th year of the CLARIN existence as a European Research Infrastructure Consortium (ERIC).

CLARIN. The Infrastructure for Language Resources 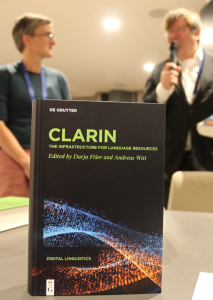 CLARIN. The Infrastructure for Language Resources

At the beginning of the conference, a Steven Krauwer Award for CLARIN achievements has been granted to students, researchers and developers at the Institute of Formal and Applied Linguistics of the Charles University. The u4u team at the Charles University has developed a translation tool for Czech and Ukrainian in order to support Ukrainian refugees in the current situation of war. The translator is publicly available and designed to help those from Ukraine to overcome the language barrier and to navigate in the Czech environment. As a result of the web service’s popularity, a mobile application has also been developed. 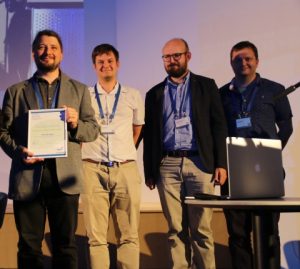 u4u team from the Charles University

CLARIN ERIC is a digital research infrastructure for language as social and cultural data with headquarters in Utrecht, Netherlands. It offers data, tools and services to support research based on language resources. The Czech participation in the CLARIN ERIC consortium is ensured through the LINDAT/CLARIAH-CZ (Digital Research Infrastructure for the Language Technologies, Arts and Humanities) large research infrastructure, coordinated by the Faculty of Mathematics and Physics, Charles University, and funded by the Ministry of Education, Youth and Sports of the Czech Republic, which also covers mandatory membership fees of Czechia to CLARIN ERIC.