On Tuesday, 19th April 2022, Czech Minister of Education, Youth and Sports Petr Gazdík visited the ELI Beamlines research infrastructure. Radka Wildová, Deputy Minister for Higher Education, Science and Research, also took part in this excursion of the most powerful laser experimental devices in the world, which are located in Dolní Břežany near Prague. The participants were introduced to the current state of the technical readiness of the ELI Beamlines facilities. On the occasion of the site visit, strategies for the operational phase and investment development of ELI Beamlines were discussed too. Among other things, the participants addressed the issue of developing an intensive scientific diplomacy to enlarge the membership base of the ELI ERIC consortium by other European as well as non-European countries. 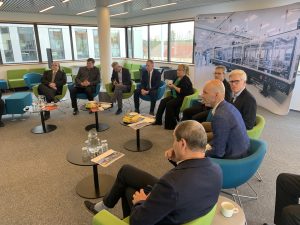 Debate with management of ELI ERIC and ELI Beamlines

“The ELI Beamlines research infrastructure is a good practice example of using the EU Cohesion Policy funds to modernise the research and innovation ecosystem in the Czech Republic. Although the genesis of ELI Beamlines is already lined by a number of important milestones, the year 2022 will be, in a way, a turning point. This year, ELI research facilities shall for the first-time host user experiments based on the open calls launched by the ELI ERIC consortium, and thus enter the ʻhotʼ operational phase. At the same time, we’re also awaiting negotiations aimed at enlarging the ELI ERIC consortium membership base by other European and non-European countries. I sincerely believe that the ambitions set for this year will be fulfilled and that the management of ELI Beamlines as well as the ELI ERIC consortium will do everything in their capacities and capabilities for the further successful development of the project. The Ministry of Education, Youth and Sports, being responsible for the Czech Republic’s international cooperation in research and development, is ready to continue supporting the ELI project at the political level in both the Czech Republic and abroad,“ says Minister Petr Gazdík. 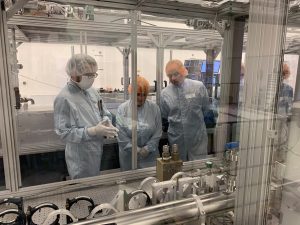 ELI (Extreme Light Infrastructure) is a European research infrastructure comprising three pillars. These are ELI Beamlines in Dolní Břežany, the Czech Republic, ELI Attosecond Light Pulse Source in Szeged, Hungary, and ELI Nuclear Physics in Măgurele, Romania. The goal of ELI research centres is to operate the state-of-the-art laser facilities, in which users will carry out research and application experiments involving the interaction of light with matter at an intensity up to ten times higher than the currently achievable values. ELI is a pilot project of the European research infrastructure built completely using the instruments of the EU Cohesion Policy in the so-called newer EU Member States. ELI has long been listed on the Czech Roadmap of Large Research Infrastructures and, as an ESFRI Landmark, also on the Roadmap of the European Strategy Forum on Research Infrastructures. Since 2021, the ELI research infrastructure has been managed through the ELI ERIC consortium, whose Founding Members have been Czechia, Hungary, Italy and Lithuania, joined by Germany and Bulgaria as Founding Observers.