Vladimír Matolín is a Professor at the Faculty of Mathematics and Physics of Charles University, where he received his Ph.D., as well as at the University of Aix-Marseille in France. He was a lecturer at the Blaise Pascal University in France for ten years, is the holder of the French Knight of the Academic Palms Award, and he was awarded honorary doctorates at the Universities of Uzhgorod and Clermont Ferrand. He is a materials physicist, specialising in the field of nano-catalysts and, in recent years, especially in materials for hydrogen technology. He is author or co-author of more than 430 publications in international journals. In addition to France, he worked for a long time also in Japan and Switzerland. 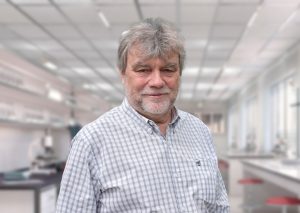 As coordinator of the SPL-MSB large research infrastructure, the Czech national node to CERIC-ERIC, he states the following about his involvement in the CERIC-ERIC activities: “In 2007, we commissioned the Material Science Beamline Laboratory (MSB) at the Elettra synchrotron in Trieste with open access for external users. To this day, we are the only institution that owns a beamline at the synchrotron. Since 2011, I have been involved with colleagues from Czechia, Hungary, Slovenia, Italy, and Romania in a working group preparing the establishment of a new ERIC consortium, which we called CERIC. Since the establishment of CERIC-ERIC, I have served as Chair and later Vice-Chair of the Board of Directors. In 2016, the MSB large research infrastructure was expanded to include the Surface Physics Laboratory (SPL) in Prague, creating the current SPL-MSB large research infrastructure.”

And what is his vision for the further direction of the CERIC-ERIC consortium?

“In my role as Vice-Chair of the General Assembly, as well as of the Board of Directors, I want to be even more active in the expansion of internal research within CERIC-ERIC. I would like to ensure that the consortium not only has the character of an institution providing open access for users to excellent research facilities in Central and Eastern Europe through a single-entry point, while internal research remains isolated in the individual partner institutions. On the contrary, I would like CERIC-ERIC to have its own research lines and internal grants with a high degree of joint involvement of its partner institutions. The aim is to fully exploit the high potential of the whole consortium to achieve excellence in the search for innovative solutions to the societal challenges of today’s world,” says Vladimír Matolín.

The CERIC-ERIC consortium was established by the Commission’s Implementing Decision of 24th June 2014 and its Members, besides Czechia, are Italy, which is also the host country of its statutory seat, Austria, Romania, Slovenia, Poland, Hungary and Croatia. Serbia has the Observer status. CERIC-ERIC is a multidisciplinary research infrastructure open for basic and applied research in the fields of materials, bio-materials and nano-technology. Czechia is involved in CERIC-ERIC through the SPL-MSB large research infrastructure, which achieves excellence in research on surfaces and surface processes.