JINR is an international intergovernmental organisation active in the fields of nuclear and particle physics, and their application to other scientific fields such as e.g. material research and radiobiology. JINR is situated in Dubna, the Moscow Region, the Russian Federation. In 1956, Czechoslovakia was one of its 11 founding Member States. After the admission of Egypt, JINR has currently 19 Member States, including 6 EU Member States – Czechia, Slovakia, Poland, Bulgaria and Romania. JINR is a world-famous scientific centre with high international rating, successfully integrating fundamental theoretical and experimental research with development and application of the cutting-edge technology and university education. 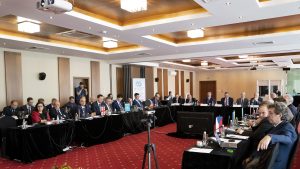 Session of the Committee of Plenipotentiaries of the Governments of the JINR Member States, 22th November 2021, Bansko (Bulgaria)

According to general opinion expressed by the JINR Member State Plenipotentiary Representatives, the accession of Egypt to JINR will significantly contribute to the development of the institute and allow expanding its scientific programme and launching new interesting and ambitious projects.

“Today, all of us have witnessed a historical event: for the first time since the 1990s, a new Member State – the Arab Republic of Egypt – has officially joined the Institute. In fact, a long-standing, close, active, and energetic cooperation with ARE has been formalised. Egypt is a country with great technological and intellectual potential. It not only develops applied research but also highly appreciates and supports fundamental science. This is undoubtedly a mutually beneficial process for Egypt, JINR, and all the Institute’s Member States. The latter ones are waiting for the additional impetus for the development of national science,” JINR Director Grigory Trubnikov noted commenting on the expansion of the membership of the institute. 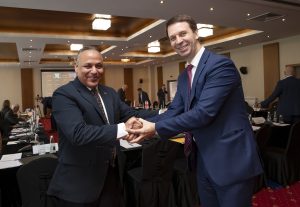 President of the Academy of Scientific Research and Technologies of Egypt Mahmoud Sakr highlighted that ARE lays great hopes on cooperation with JINR and alignment with the scientific agenda of all the Member States.

“We consider JINR not only as one of the leading scientific organisations in the fields of nuclear physics, particle physics, and accelerator technologies but also as an international platform accumulating scientific potential of now 19 Member States and 5 Associate Members. We hope that our participation will be also enriching for the institute. As a guide to the scientific communities in the countries of North African, Middle Eastern, and Arab regions, Egypt will contribute to establishing partner contacts with JINR,” Mahmoud Sakr noted.