A great success of Czech science in this regard is the inclusion of the EIRENE (European Environmental Exposure Assessment Network) project, coordinated by the Masaryk University, in the ESFRI Roadmap 2021 Update. This new European research infrastructure intends to support comprehensive research on human health and the environment, way of life, diet, exercise, economic pressures and psychosocial problems. The concept of a pan-European infrastructure supporting research into the effects of long-term exposures to various types of stressors on population health and the roles these exposures play in the development of chronic diseases is based on ten years of experience in successfully building the Czech national research infrastructure RECETOX RI. Nowadays, EIRENE already connects 50 research institutions from 17 countries, including the United Kingdom and the United States of America.

“The development of global situation in the past two years has clearly shown how closely the mankind is connected to the environment and how vulnerable the whole web of complex relationships between nature, society and every human being is. It is clear that European countries need to move from passive observations of negative phenomena to active changes. In this regard, EIRENE can be a vital European research infrastructure providing the data and tools needed to realize ecological transition and achieve key priorities for a cleaner environment, water, soil, food and healthier population,” says Jana Klánová, Director of RECETOX RI and leading coordinator of EIRENE.

“It is not so often that Czech research institutions are the driving force behind major changes in the international context. Therefore, I am very glad that the biomedical campus of the Masaryk University is becoming not only an internationally competitive research infrastructure, but also an incubator for new teams and ideas. The EIRENE project will make Brno an important European research centre in the field of environmental epidemiology,” says Martin Bareš, Rector of the Masaryk University.

“RECETOX RI is one of the top-class research infrastructures and can be considered one of the flagship scientific workplaces not only in the Czech Republic, but also in Europe and all around the world. The implementation of the EIRENE project poses many other challenges for the Masaryk University and all other partners involved in the project consortium, but inclusion of the project on the ESFRI Roadmap already represents a significant milestone and confirmation that the established path is the right one,” says Pavel Doleček, Deputy Minister for Higher Education, Science and Research, Ministry of Education, Youth and Sports of the Czech Republic.

The RECETOX large research infrastructure, based at the Masaryk University, supports interdisciplinary research into chemical exposures and their effects on human health. It provides open access to unique capacities of accredited laboratories, data from long-term population and environmental studies and tools for their integrative analysis and interpretation. RECETOX RI is a part of the RECETOX European Centre of Excellence for Research of the Human Exposome and it develops the concept of the Brno Living Laboratory as a project of close cooperation between science, decision-making and application spheres and citizens. 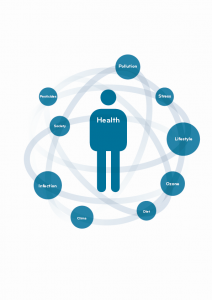