The establishment of the Extreme Light Infrastructure – European Research Infrastructure Consortium (ELI ERIC) opens the door for researchers, industry and countries to gain access to the world’s largest collection of super-powerful and ultra-fast lasers for science and industry.

The European Commission has taken a long-anticipated decision to establish the Extreme Light Infrastructure (ELI) as a European Research Infrastructure Consortium (ERIC). The ELI facilities make up the largest, multi-site laser facility in the world. The host countries, the Czech Republic and Hungary, applied in May 2020. The decision to approve the application comes after years of intense negotiations.

“The foundation of the ELI ERIC consortium is the culmination point of more than a decade of efforts to build and operate one of the pillars of the most powerful state-of-the-art laser research infrastructure in the Czech Republic. In addition to that, for the first time ever the Czech Republic is becoming the host country of the statutory seat of the ERIC consortium,” says Robert Plaga, Minister of Education, Youth and Sports of the Czech Republic. “The successful implementation of the ELI Beamlines project by the Institute of Physics of the Czech Academy of Sciences is of enormous scientific and technological importance, while also bringing significant socioeconomic impact in terms of the regional development, thus fulfilling the objectives of the EU cohesion policy.” The ERIC is a unique legal entity, formed by an EU regulation specifically for research infrastructures. As an international organisation, its Members are countries, which contribute scientifically and financially to the consortium. In addition to the Czech Republic and Hungary, Italy and Lithuania are Founding Members. Germany and Bulgaria are Founding Observers with an aim to fully join at a later date. Other European and non-European countries expressed interest to join after establishment.

The newly formed ELI ERIC is tasked with enabling scientists to access the state-of-the-art lasers. Access is open for scientists from anywhere, based on proposals evaluated by an independent panel. Being a Member means that a country’s scientists can help shape the strategy, participate in mission-based research, and provide access for its graduate students and industry.

“For scientists already in the field and disciplines new to lasers, ELI is very interesting,” says Jean-Claude Kieffer, a leading expert in lasers and photonics, and Director at the Énergie Matériaux Télécommunications Research Centre in Montreal, Canada. “The advanced lasers offer higher intensities and repetition rates, potentially opening new lines of research and new avenues for societal applications.” 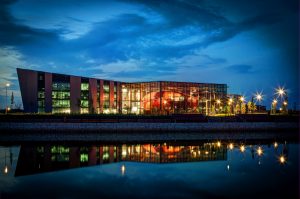 The ELI ERIC facilities are ELI Beamlines in Dolní Břežany in the Czech Republic and the ELI ALPS facility in Szeged, Hungary. They are the first large-scale science labs built in the EU’s new Member States, at a cost of € 300 million – each – over the last six years, using the European Structural and Investment Funds. They already employ 600 scientists, engineers, and support staff from the host countries, the region and abroad.

“Thanks to concentrated international cooperation, in just ten years we have been able to build and make operational state-of-the-art scientific instruments that open up unprecedented opportunities for breakthrough discoveries,” says Roman Hvězda, Managing Director at ELI Beamlines in Dolní Břežany. “This is among the largest science investments in Europe with now proven positive impacts on the Czech Republic and the entire region boosted during the COVID-19 pandemic.”

There is a third ELI facility being built in Romania, near the capital Bucharest. The ELI NP laboratory, pioneering the new field of nuclear photonics, also employs hundreds of scientists and graduate students. It is expected to join the other two ELI labs in the newly formed international organisation.

The ELI facilities were first proposed by leading European scientist in the field and led by 2018 Nobel Prize laureate Gerárd Mourou. As far back as 2006, ELI was identified as crucial for Europe to maintain a lead in laser technology and science.

“Each of these facilities was built to specialise in areas of science and laser technology to complement the other facilities,” says Gábor Szabó, Managing Director at ELI ALPS in Szeged. “Any one of them would, by itself, be among the world’s most advanced.” 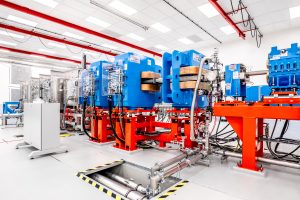 Together, ELI facilities include a suite of lasers unmatched anywhere in the world, including pulses up to 10 petawatts, a flash that for a brief instant is 10% of the Sun’s energy hitting the Earth; ultra-fast lasers approaching attoseconds – about one quintillionth of a second; and a combination of high-average power laser firing more than 1 petawatt up to ten times a second. 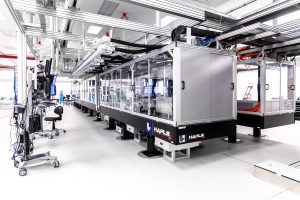 The scientists coming to ELI will be able to do multidisciplinary studies relevant for both fundamental and applied research. That will lead to broad benefits to society ranging from new compact acceleration of particles improving oncology treatment, medical and biomedical imaging to support personalised medicine, and the local production of medical isotopes. Advanced industrial applications include non-destructive ways to inspect critical components and fast electronics.

In energy and sustainable environmental practices, ELI will enable better understanding of aging nuclear materials and new methods of nuclear waste processing. Improved understanding of mechanisms for laser driven fusion could be a source of unlimited energy. Study of the fundamental processes for creating matter will open new understanding about the origins of stars and matter.

The integration of the ELI facilities is planned to take place over the next two-to-three years, comprising an initial operations phase. During that time, management, technical and scientific procedures in the different ELI facilities are being harmonised. The merger is being facilitated by a € 20 million grant from the European Union under the Horizon 2020 Framework Programme for Research and Innovation known as “IMPULSE”.

„Cosmos in a box“, creating a supernova inside the P3 experimental chamber serving as an astrophysics laboratory