On Thursday, 31 August, 2017, a prototype telescope proposed for the Cherenkov Telescope Array (CTA), the SST-1M, recorded its first events originating from space, while undergoing testing at the Institute of Nuclear Physics Polish Academy of Sciences (IFJ-PAN) in Krakow, Poland. The SST-1M is proposed as one of CTA’s Small-Sized Telescopes (SSTs), which will cover the high end of CTA’s energy range, between about 1 and 300 TeV (tera-electronvolts).

After the installation of the mechanical system of the telescope, developed in Poland, and the mirror segments supplied by Czech institutions and after the adjustment of the optical system by the experts from Olomouc, the camera supplied by the University of Geneva was installed at the end of August. The electronics and operational safety needed to be tested in the local conditions of high atmospheric humidity.

See the camera installation in the video below.
https://youtu.be/WJzN9poS-Bw 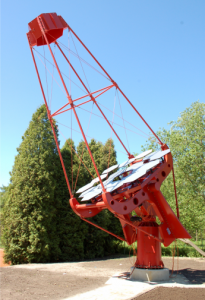 On the night of 31 August, another crew in Geneva, Switzerland, sent remote control commands to the telescope to start tracking two gamma-ray emitters (two black holes) with its camera. Within seconds, the coordinates of the first source were set and the telescope slewed into the observation position, allowing the telescope to track the source and the data to flow. Even with the moonlight and lights from the city, more than 5 million events and 330 GB of data were acquired with the camera in less than 1.5 hours of operation.

Click on the reference below to watch as one of the beautiful events is captured.
http://www.isdc.unige.ch/~lyard/FirstLight/FirstLight_slowHD.mov

“Additional tuning and hours of operation are needed before the SST-1M performance can be clearly assessed, but this is a major milestone for the project and its participants, who have worked hard through five years of design and laboratory testing to make this accomplishment a reality,” said Prof. Teresa Montaruli, project leader of the SST-1M.

The SST-1M project team includes 12 institutes from 5 countries (Czech Republic, Ireland, Poland, Switzerland and Ukraine). The project is led by the University of Geneva (project leader: Prof. T. Montaruli, project manager: Dr. D. della Volpe, camera coordinator: M. Heller). The quality assurance engineer is M. Stodulska, IFJ-PAN. The responsibility for the optical system is assumed by the Czech partners (SLO FZÚ AV ČR a UP Olomouc, the head of the optical working group is M. Pech). The Polish partners designed and built the telescope structure, its control and the fully-digitizing readout electronics of the camera (mainly developed by Eng. K. Zietara). The Czech parties are responsible for the optical system and supply and test the mirror segments, while the Swiss partners designed and realized the camera mechanics and photosensor plane based on a new technology in high-energy gamma-ray astronomy, silicon photomultipliers (SiPMs). 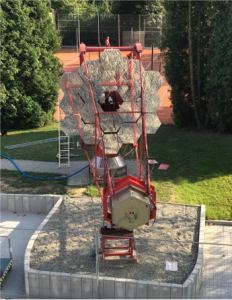 The SST-1M is one of three proposed SST designs being prototyped and tested for CTA’s southern hemisphere array. It uses a single-mirror design with a 4 m diameter (focal length of 5.6 m) reflector that uses hexagonal facets. The camera (pictured to the right) uses SiPMs and about 1,300 ultra-fast (time resolution of the order of 500 picoseconds) light-sensitive pixels to convert the light into an electrical signal that is then digitized and transmitted to record the image of the cascade.

The SSTs will outnumber all the other telescopes with 70 planned to be spread out over several square kilometers in the southern hemisphere array (Chile – Paranal). Since the showers generated by very high-energy gamma rays (between a few TeV and 300 TeV) produce a large amount of Cherenkov light, it is sufficient to build telescopes with small mirrors to catch that light. The SSTs’ wide coverage and large number, spread over a large area, will improve CTA’s ability to detect the highest energy gamma rays.

Czech participation in the SST-1M project

The experts from the Czech Republic, namely the Institute of Physics of the Czech Academy of Sciences (FZU), the Joint Laboratory of Optics of the Palacky University and FZU (SLO), and the Charles University has participated in the development of the SST-1M telescope already since 2015. The Czech partners were invited to join the work on the design, testing, optimization and construction of the telescope based on their previous experience with similar projects (Pierre Auger Observatory, CAT, CELESTE and others). Mgr. Miroslav Pech, Ph.D., is the leader of the group responsible for the whole optical part of the telescope. The Czech team supplies large mirror segments (manufactured in the laboratories of SLO Olomouc). These segments are hexagonal, made of glass coated with a thin reflective layer optimized for operation in the ultraviolet part of the electromagnetic spectrum. Further activities in the Czech Republic include optical simulation, optimization, design and construction of supporting systems and method for correct operation of the telescope. New methods of optical adjustment and positional control of the mirror segments are being developed as the Czech Republic collaborates on the development of the pointing solution and the control system for the stability of the optical system.

The Czech participation is ensured by the Ministry of Education, Youth and Sports (MŠMT ČR) within the projects of large infrastructures LM2015046 and EU-MŠMT CZ.02.1.01/0.0/0.0/16_013/0001403. A further project MŠMT ČR LTT17006 supports the scientific analysis of the first data of the prototype which are currently underway.